Modern machine learning algorithms crucially rely on several design decisions to achieve strong performance, making the problem of Hyperparameter Optimization (HPO) more important than ever. We believe that a practical, general HPO method must fulfill many desiderata, including: (1) strong anytime performance, (2) strong final performance with a large budget, (3) effective use of parallel resources, (4) scalability w.r.t. the dimensionality and (5) robustness & flexibility. These desiderata drove the development of BOHB [Falkneret al., 2018], which satisfied them by combining the best features of Bayesian optimization (BO) via Tree Parzen estimates (TPE) [Bergstra et al., 2011] (in particular, strong final performance), and the many advantages of bandit-based HPO via Hyperband. While BOHB is among the best general-purpose HPO methods we are aware of, it still has problems with optimizing discrete dimensions and does not scale as well to high dimensions as one would wish. Therefore, it does not work well on high-dimensional HPO problems with discrete dimensions and also has problems with tabular neural architecture search (NAS) benchmarks. This post presents DEHB which is the new successor of BOHB that replaces the BO component with the evolutionary search approach of Differential Evolution (DE) (as the figure below shows) to yield a new general optimizer to solve a broad range of HPO benchmarks and NAS problems. 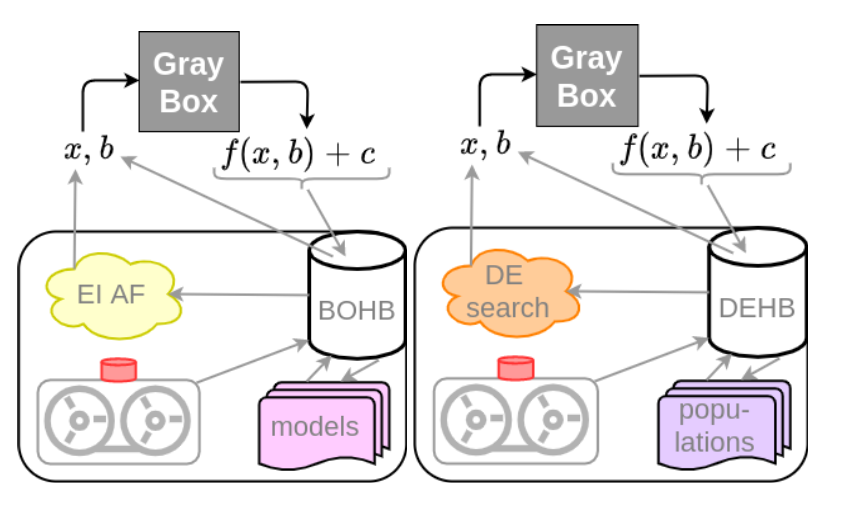 DEHB in particular is up to 1000 times faster than random search (RS) (Left plot) and up to 32 times faster than BOHB (right plot) on HPO problems; on toy functions, these speedup factors even reached 33 440 and 149, respectively (bottom plot).

DE is a simple, well-performing EA to solve a variety of optimization problems, and starts by initializing a population space of N individuals uniformly at random in the search range. Then it iterates 3 basic steps:

The runtime of DEHB does not grow over time in stark contrast to BO methods whose time complexity is in cubic in the number of functions evaluations. SH brackets can be asynchronously distributed over free workers with the use of a central DEHB Orchestrator that keeps a single copy of all DE subpopulations allowing for asynchronous and immediate DE.

DEHB has been evaluated on a broad collection of HPO and NAS benchmarks, and compare DEHB to a broader range of baseline algorithms and compute the average relative rank over time for each algorithm. 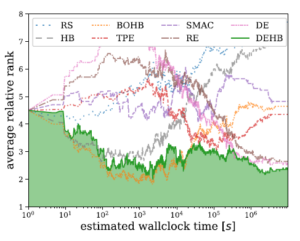 We optimize six architectural and training hyperparameters of a feed-forward neural network on six different datasets from OpenML. Adult and Optdigits are examples where DEHB is achieving the best final score.

A broad range of NAS benchmarks is used, and here we show the performance of ImageNet16-120 from NAS-201 and the Protein Structure dataset provided in NAS-HPO-Bench.

This toy benchmark is useful to assess scaling behavior and ability to handle binary dimensions.  Here we present the 8 and 64-dimensional spaces in which DEHB shows superior performance.