Rethinking AutoML: Advancing from a Machine-Centered to Human-Centered Paradigm 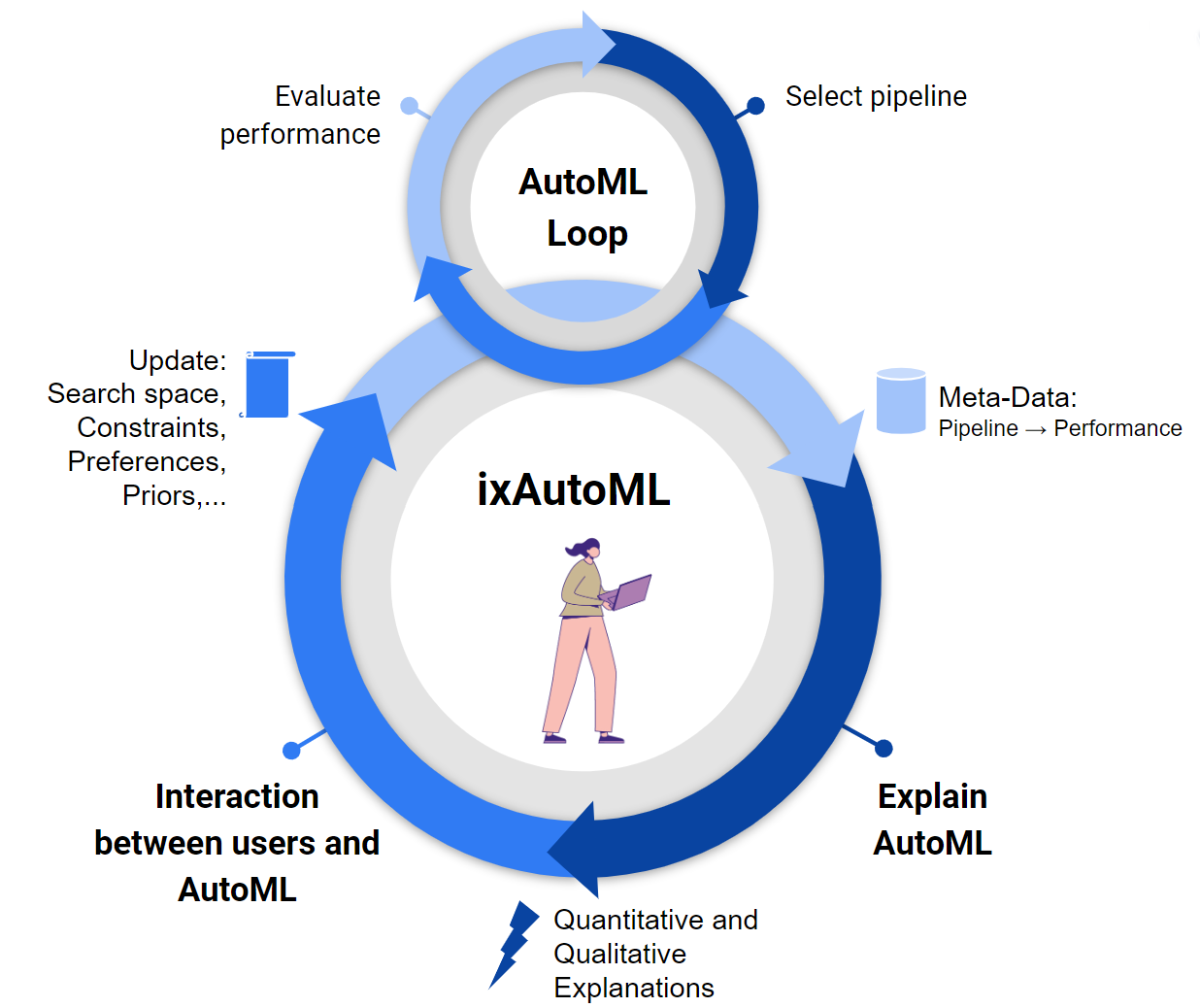 In this blog post, we argue why the development of the first generation of AutoML tools ended up being less fruitful than expected and how we envision a new paradigm of automated machine learning (AutoML) that is focused on the needs and workflows of ML practitioners and data scientists.

The Vision of AutoML

The last centuries showed impressively that the democratization of technology led to higher productivity, more wealth, and improved standards of living. As Andrew Ng recently noted in a TED talk, thinking even about the earlier history, the literacy of large parts of the citizens was a crucial step towards advances in science, education, and information sharing.  These days, we believe that it is an arguably strong hypothesis that machine learning (ML) has a similar potential to lead to radical changes in many applications. However, we are far away from a democratization of ML, and only a handful of experts with many years of experience can unleash the full potential of this key technology.

Motivated by this observation, the primary vision of AutoML is to enable everyone to use machine learning without deep expertise in ML itself easily. Democratization of ML (a.k.a. AI literacy) was our big dream, and it still is. Of course, AutoML is not the only piece that is required for the democratization of ML, but we deem it to be an extremely important contribution to that goal.

Have we Failed to Reach Out to Our Target Audience?

On the one hand, in line with our vision, we focused on targeting users with little or no ML expertise, e.g., from engineering, biology, chemistry, physics, medicine, and other disciplines. Although the AutoML community achieved tremendous success in improving the capabilities and efficiency of AutoML within the last decade, AutoML is surprisingly still not well established within these disciplines. We blame this on various potential reasons:

On the other hand, ML practitioners and data scientists became more and more interested in AutoML techniques and became another primary target audience of AutoML. In fact, it is well known that the configuration of hyperparameters is essential for the successful training of ML models, but at the same time it is a very tedious and error-prone task. Therefore, practitioners have already used the simplest of all AutoML methods for decades, i.e., grid search and random search. Surprisingly, many ML practitioners and users seem to be rather oblivious to the fact that both grid and random search are often fairly inefficient, and modern approaches based on Bayesian optimization, evolutionary strategies, multi-fidelity optimization, or gradient-based optimization can be more efficient by orders of magnitude. Unfortunately, despite the rise of this new target audience, the AutoML community has spent little time thinking about how to adapt their tools for practitioners with ML expertise.

What is holding AutoML back?

By now, there are many hypotheses about what is holding AutoML back from a big success throughout many disciplines and enabling different target groups. To list a few of them:

In view of the big success of unexplainable DL models and training processes, the last point regarding understandability and trust is actually a rather surprising hypothesis for the missing success of AutoML. However, if we think more deeply about the common workflow of ML practitioners and data scientists, it becomes clear that AutoML is designed to replace large parts of their day-to-day jobs and less for actually supporting them. So, why should they use AutoML without trusting it and the possibility of explaining design decisions the tools made, but they have to justify for in the end?

So, let us assume that a group of data scientists is willing to use AutoML. They start by feeding their data into the AutoML package, press the magic button, and then have to wait; wait a few minutes, hours, or even days depending on the task, dataset, model, AutoML space, and a plethora of other factors. They have to spend this time without any intermediate feedback or possibilities to observe possibly wrong or suboptimal decisions made by the tool negatively influencing the search process, let alone options to intervene in such cases. As a consequence, it might very well happen that after several days, the AutoML tools return a solution that is unsatisfying for whatever reason.

Coming back to our comparison to DL, the aforementioned process is also unreasonable in that case: Feeding in data to the deep neural network (DNN) and waiting for days before checking its progress. Instead, practitioners start the training process of a DNN and monitor different runs on-the-fly (e.g, by using something like tensorboard or wandb). In case of potential problems, they change the training process or even terminate the training. Thus, although DL is a hard-to-understand process and can require considerable time, researchers and practitioners developed an interactive workflow with rapid prototyping in which they can actively participate.

So our hypothesis is: Instead of replacing the efforts of developers, these developers seek interactive ways for working hand in hand with AutoML tools by making use of the best of both worlds.

The Need for a New Paradigm: Human-Centered AutoML

To put it in exaggerated terms: As a community, we failed to understand the real problems of practitioners before starting to work on solutions. Correspondingly, we believe that it is time for a new paradigm completely rethinking AutoML approaches with the practitioner in mind. We envision it to be:

The Foundations of this New Paradigm

To understand how we envision this new paradigm to be implemented, let us first think again about the workflow of data scientists. They are often driven by rapid prototyping, i.e., evaluating simple models on parts of the data first, exploring possibilities, gaining insights about the data, required preprocessing, and model classes, followed by continuous re-evaluation. In some sense, that is already what AutoML tools based on the concept of multi-fidelity optimization are doing these days, but without the human in the loop.

However, human expertise can be helpful or even required, for example,

With these considerations in mind, how can we incorporate practitioners back into the loop, such that the overall development of new ML applications is as efficient as possible? We believe that this change requires two components: 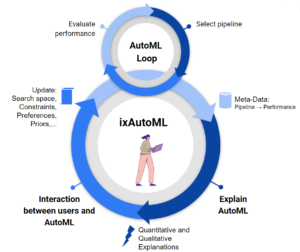 Although our group has intensively worked in various collaborations on ideas aimed at making AutoML more explainable, we still have a long way to go. Currently, the few methods going in the direction of explainability in the context of AutoML are mostly centered around hyperparameter importance or hyperparameter effects. Unfortunately, a direct transfer of explainability methods from classical ML is often not possible as the data collected during the AutoML process does not satisfy standard assumptions, in particular, the data points are not independently sampled. Instead, a new pipeline is evaluated and its corresponding performance is collected based on the previously evaluated pipelines and their performances. As such, our data is biased towards well-performing regions of the configuration space, and likewise, other regions are undersampled by the purpose of having efficient optimizers. As we have recently shown [Moosbauer et al. NeurIPS’21], this bias in the data can lead to significantly biased explanations of the interaction between the composition of a pipeline and its performance.

Overall, the main challenge will be to bridge AutoML and interpretable machine learning (iML), extending the latter s.t. corresponding iML methods are applicable to AutoML approaches, and figuring out what is actually needed from the users.

First AutoML approaches were designed with the idea in mind that users only provide data and maybe specify the configuration space of possible ML pipelines, DL architectures, and hyperparameters. Recent advances also take multiple objectives, constraints, and preferences into account. For example, we recently showed how to make efficient use of expert knowledge about promising configurations [Souza et al. ECML’21, Hvarfner et al. ICLR’22, Mallik et al. MetaLearn’22]. However, these are limited to initial expert beliefs. How would we efficiently do this in an interactive interplay between AutoML and developers? How does this interact with changing preferences, constraints, configuration spaces and more?

Current AutoML approaches for stationary optimization problems have to be changed to non-stationary problems where it is unknown how users can interfere in the process at any moment.

The Vision of Interactive and Explainable AutoML: ixAutoML

We strongly believe that interactive and explainable AutoML (ixAutoML) has the potential to be a game changer in several aspects. It enables: